July 29, 2010
Software Product is a bunch of functionality assembled together and tied within the boundary of business rules. Each line of code which is written to implement a functionality has a potential bug in them. And each valid bug raised requires a change in the code written.


Are these forming a vicious circle ? Let me explain.

In a typical agile methodology, we write the Unit Tests first and then the actual functionality. So that means we actually know how the system would be tested (to some extent). But after writing the functionality, the developer calls a fellow tester to do a Dev Box Testing. Dev Box Testing is generally done on a developer’s machine with a very minimal set of test data (Thanks to developers laziness ! :)). It’s done to ensure that the intended functionality is properly developed and there are no major bugs. It also gives developer the chance to debug the application in case of any exception (if encountered). So till now we have done Unit Testing and Dev Box Testing. What next? Post the developer check in, the application is generally deployed in a Test Environment for a further round of testing. This testing is intensive and is iterated over a large set of sampled data. This kind of full fledged testing often results in uncovering of many bugs.
So we are still left with bugs even after Unit Testing –> Dev Box Testing. So if we see the whole process process,
We write code –> We induce bug –> We find bug -> We write code to fix bug –> We induce bug –> … 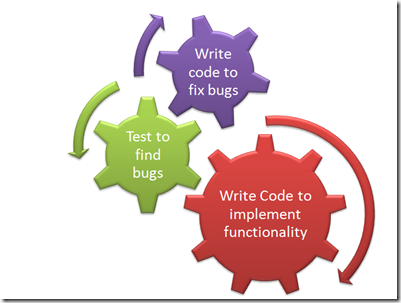 Today I was trying out  to test the Drag and Drop feature provided in webdriver.  First I searched for a website which allows me to perform drag and drop operations and came across a website “ http://jqueryui.com/demos /”. On the top left you will see 2 items “Draggable”  and “Droppable”.  Those are of interest to us as of now to test the Drag and Drop feature if Webdriver. Draggable : The draggable sections looks like this. So you have a web element which can be dragged around in the circle. API to be used for these kind of controls is org.openqa.selenium.interactions. Actions . dragAndDropBy ( WebElement source , int xOffset , int yOffset ) Sample code to drag this element to an offset is WebElement draggable = browser.findElement(By.id("draggable")); new Actions(browser).dragAndDropBy(draggable, 200, 10).build().perform();     Droppable: The Droppable sections looks like this. You have 2 elements i.e one draggable and the other one to drop into.
Read More »