Growth, Quality & Culture - Yes they are bundled together

Today I was having a discussion with one of my long time friend who is in a senior role in an IT industry. We touched upon a lot of topic but one thing which makes me write this blog is Culture, Quality (by quality I mean the quality of people) and Growth.
For once it does look like 3 different topics but it's actually interrelated and bringing up one invokes other. So you can't have discussion on Culture in silo or for that matter either Quality or Growth. 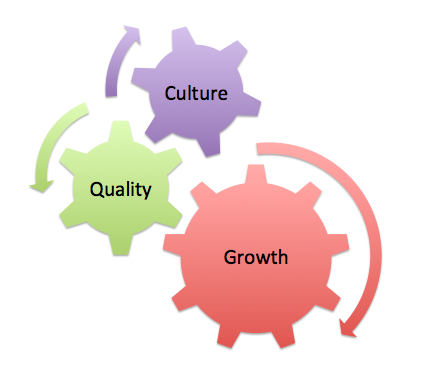 Relating from my experience of hiring in one of the companies I worked with, had three rounds of interview with two people evaluating the person in each round. So if a candidate has gone through all rounds there would be six different opinions and a higher chance that people might have mixed opinions. The only situations where all six of them would have readily agreed was when the candidate is really poor in knowledge (mostly they wouldn't reach next round ) or really outstanding where in people reach consensus easily. What I am coming at is we are in dilemma when we meet average candidates. And we need to agree here that IT industry is not full of super talented techies. So when a company is trying to grow, they need to hire people and when you go on hiring spree all you will get is a pool of candidate which is mostly formed by these mediocre or average people. So a company is known by the culture it has, whether they hire sharp people and boast that they are really in that segment which hires top brains or they accept the truth that they are just another IT shop and need people who can get the job done.

Now your culture actually determines the output of your dilemma. When the 6 people get in a discussion to finalise whether to take him or not the outcome is largely dependent on the culture of the company. And the best thing is to observe that not each one in the room would have the same perception of culture. Some might strongly feel that there is no value addition to the company (in terms of knowledge) by getting him and so we should reject, some might say that he possess basic skills and can get the work done and so we should hire. The end result of the discussion actually impacts the culture of the company. It's the thought process of a person and his perception which shapes and influences a company's culture. However I am not saying that it should be just technical expertise deciding whether you should be hired or not, there are lot other values people bring in apart from their core expertise. One other thing is while hiring we should always think that we are hiring someone for long term. Earlier when I started taking interviews (may be 2008 or so) I used to think that a right hire would always stay and a wrong hire would eventually get weeded out in long term. But I was so wrong, it so happens that a wrong hire (basically I mean not a cultural fit) would eventually dilute your company culture. So all I wanted to point was Growth might come at a risk of Quality and Culture.

And as long as we try to preserve the culture, we will have a quality growth !
Entrepreneurship Learning Personal Opinion