Conquering the world of Mobile Advertisement

April 06, 2009
In the present era we have a deep presence of mobile & internet in our life. People are driven by socio-emotional need to get connected with their friends, families, information and entertainment. As per the latest research, people are using their mobile to access internet as much as they use traditional web. Apart from all this, we would have hardly noticed but mobile phones are intensely personal devices which we carry with us almost everywhere. As a result, it is hard-to-resist medium for advertisers and proves to be the most intrusive form of marketing. 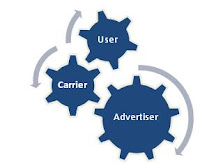 If we try understanding the entire situation, it is carrier which is interfacing both user & advertiser and they have to do the balancing act between the two. The biggest risk taken by a carrier is that there is a high potential for turning off prospective customers. Though there is a significant challenge involved in creating awareness among the advertisers about the mobile domain, there are also some benefits which carriers could offer to them.

Customer Analysis has been and will be one of the prime challenges for the advertising. Carriers have the advantage that they know who the subscribers are. They can track which web pages the customers land on. A little bit of data mining on the user and their mobile communication usage can result in a good data which could be very useful for the advertisers. One of the biggest advantages of mobile devices is that they allow instant reach which in turn gives mobile advertisement its effectiveness. It also helps in increasing awareness and allows user to send a quick response by messaging, calling or downloading.

The general perception of a user about ads is that they are irrelevant, unwanted, uncontrolled and above all spam. However a carrier can prove that the mobile advertising is pretty different from the above.

Carriers can allow users to take control and opt themselves for ads. It should be left at their choice what ads they want to receive in addition to the kind of ads. This empowers user and at the same time encourage them to mobile advertising service.

Carriers can provide a self service portal to user where in they can fill in their personal interest and details. This will help carrier to ensure that the mobile ads and promotions are catered to a section a user based on their choices and are more relevant.

In the entire business of mobile advertisement, carrier plays a major role of bridging the gap between the user and the advertiser. They make advertisements more valuable, measurable and targeted.
Post to Del.icio.us
Personal Opinion